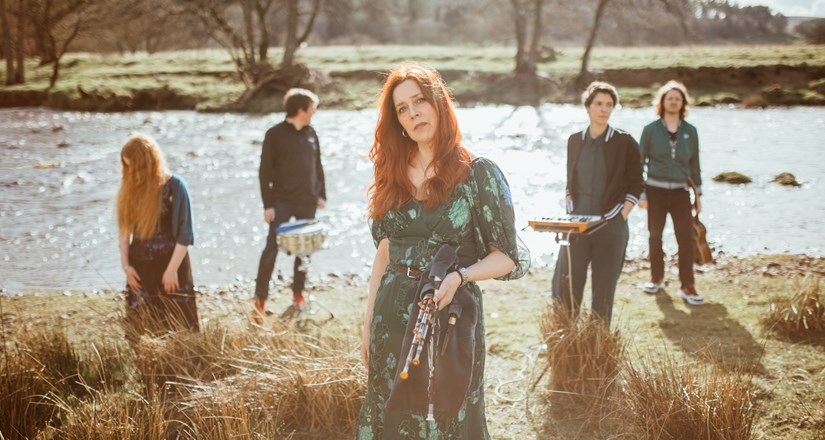 "No one has evoked the landscape and traditions of Northumbria more affectingly than Kathryn Tickell; a champion of the Northumbrian pipes, she is steeped in the songs and mythology of the north-east." (★★★★ The Guardian).

The Darkening’s inspiration comes from the wild, dramatic, weather-bitten countryside along Hadrian’s Wall, which seems so quintessentially Northumbrian…and yet, 1900 years ago that same landscape was inhabited by people from the furthest reaches of the Roman Empire, worshipping different gods and following different customs.

Kathryn Tickell & The Darkening embrace that global perspective, bringing some of the oldest Northumbrian tunes and songs throbbing to life, intermingling them with new material and binding it all together with contemporary resonance and attitude.

Kathryn first took up the smallpipes at the age of 9. She learnt tunes from hill-shepherd friends and family, recording them on her trusty cassette player. Since then she has taken the musical spirit of ancient Northumbria to stages all over the world.

As well as her own acclaimed concerts and recordings, she has recorded and played with Sting, The Chieftains, Penguin Café, Eveyln Glennie, Jacob Collier, Royal Northern Sinfonia and many more. She was awarded the OBE for services to folk music. Kathryn also presents 'Music Planet' for BBC Radio 3.

Kathryn Tickell is a Northumbrian piper, fiddle player, composer, educator and broadcaster. Her work is deeply rooted in the landscape and people of Northumbria. Kathryn has released 15 of her own albums and has also recorded and performed with Sting, The Chieftains, The Penguin Cafe Orchestra, Evelyn Glennie, Jacob Collier, Andy Sheppard, Royal Northern Sinfonia and many others. She has twice won “Musician of the Year” at the BBC Radio 2 Folk Awards and was awarded the OBE for services to folk music. Kathryn is also a presenter for BBC Radio 3’s popular roots music programme “Music Planet”.