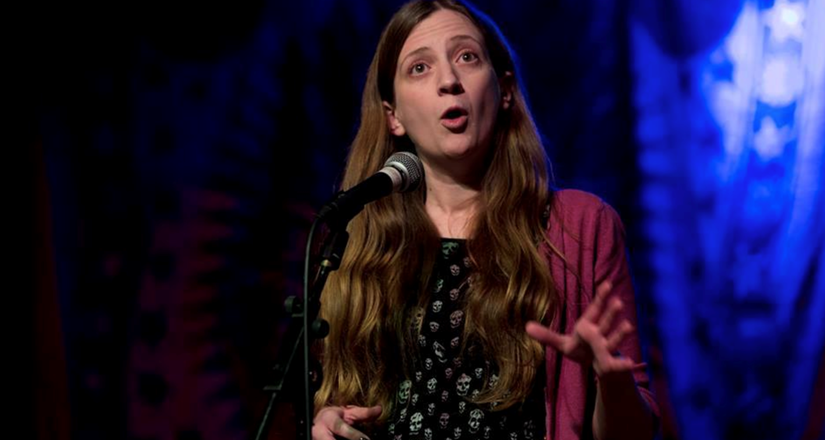 Just a fiver to this great spoken word show about identity, music, friendship and the power of a really great black lipstick! Remember when your CD player was your best friend? Or when you papered your walls with band posters?

A spoken word show about identity, music, friendship and the power of a really great black lipstick! Remember when your CD player was your best friend? Or when you papered your walls with band posters? Chances are, the music of your teenage years has had a profound effect on the person you are today. Join poet (and recovering Goth) Leanne Moden as she takes a wry sideways look at the musical subcultures that made us who we are, using stories, poetry, comedy and theatre to ask the question: what does it mean to be part of a tribe?

Leanne Moden is a poet from Norfolk, now living in Nottingham. She's shared her poems at events across the UK and around Europe, including recent sets at Prima Vista festival in Tartu, Estonia and Día Mundial de la Poesía In Granada in Spain. Leanne regularly performs at UK Festivals including WOMAD, the Edinburgh Fringe, the Aldeburgh Poetry Festival, the Beverley Folk Festival, and Bestival on the Isle of Wight.​​

She has also done gigs at the Fourth Wave Feminist Festival in Hackney Downs, Trinity College Cambridge, the Whitworth Museum in Manchester, and she even did a set as part of the TEDx WOMEN talk at UCL in 2016. Last year, she appeared at the Nottingham Poetry Festival supporting poet, TV producer, and festival organiser Henry Normal.

Leanne competes in UK poetry slams and she has been a national finalist at the BBC Edinburgh Fringe Slam, the Hammer and Tongue Poetry Slam, Poetry Rivals, the Roundhouse Slam, the Superheroes of Slam, and the Anti-Slam. She has performed everywhere, from hospitals, schools and community centres, to caves, car parks and on board moving canal boats too!

Leanne is currently working on a full-length spoken word show with the support of Arts Council England, as well as commissions with the National Justice Museum, Creative North Nottingham, Nottingham City Homes, Made in Corby and Writing East Midlands. She is also part of the team at UNESCO Nottingham City of Literature.